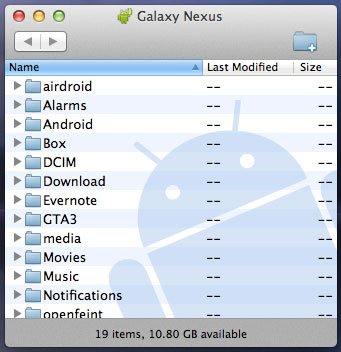 Why doesn’t the Galaxy Nexus appear as a removable disk on a Mac?

Before Android 3.0 devices typically divided their storage into two separate partitions, a system partition and a media “SD Card” partition. When a device was plugged into a computer, it would mount the second SD card partition using USB Mass Storage, just like a regular flash drive. With newer versions of Android, manufacturers have the option to use just one big partition for everything, which is convenient for the user of the device, but slightly complicates computer connectivity. The Galaxy Nexus is the first phone to follow this model, and you can bet other phones will too in the future. Devices with SD card slots will continue to use USB Mass Storage for SD card file transfers.

Here are three options for getting files to and from the Galaxy Nexus on a mac:

This is very straightforward, plug the phone in with a USB cable, and fire up the app supplied by Google. Required Mac OS X 10.5 or later. Easy to use interface that looks a lot like Finder, and fills the missing MTP compatibility.

Want to skip the USB cable altogether? AirDroid is a very clever Android app that lets you manage your device through a web browser on a computer through Wi-Fi. Get the AirDroid app from the Android Market, connect to the same Wi-Fi network as your computer, run the app and follow the instructions.

AirDroid runs a web server on the phone that you can connect to from a computer. It lets you manage files and apps wirelessly. As an added bonus you can send and receive text messages right from the browser.

At the time of this post AirDroid is in beta, and it’s free.

Google Music is a cloud streaming service for Android (and web) that will let you upload 20,000 of your songs into “the cloud” and listen to them on the phone over your data connection. Music purchased though Google Music will appear in there automatically. You will need to download and install Google’s Music Manager app onto your computer, and upload your music. While this is very handy if you can’t fit your music into your phone, you need to have a generous data plan allowance for this to work. Also uploading your entire music collection into the cloud may take a while.

A true tech enthusiast and nerd. Mickey is the go-to tech support member of any group he is part of. He loves helping people find solutions to unusual problems and recommending appropriate products. Any money Mickey earns from writing typically goes toward pre-orders of the latest mobile devices and photography gear.

One of only a handful of weak points of owning an Apple Watch is having to charge it daily. This is fine most of the time, but what happens when you go on a weekend trip and forget to bring the...

Ever wanted to share what you see on your Apple Watch to a friend on iMessage or attach it to an email? There is actually a secret button combination to accomplish just that! Press and hold down...

Established in 2011, Mobile-Pixels.com provides helpful information and advice on common problems and questions regarding mobile devices and tech.